Wayang, the Ancient Way of Disseminating Knowledge and Wisdom 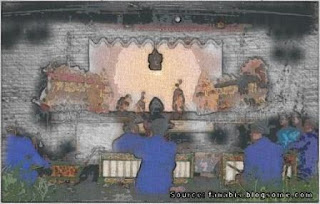 Like cinema, the wayang mainly consists of a screen and one or two lamps functioning as the projector put in front of the curtain on which the shadows of the puppets are projected. But unlike in cinema, the spectators sitting behind the curtain watching the shadow from behind.

The wayang performance depends on the player, known as dalang, who sits in front of the screen displaying a series of leather puppets with different scenes of dialogues, duel, war,  and actions related to the story being told orally, accompanied by gamelan music as a background.

Obviously, the dalang should have a talent being able to speak in many voices and intonations to represent different figures and characters. When the dalang breaks telling the story the pesindens, usually good looking ladies, will sing themed songs. The lyrics of the songs are still related to the central theme of the performance.

Wayang was known to be played far in the past, at night lighted only by palm oil lamps or just by moonlight in the first centuries of our era when Hindu was flourished. This traditional show was continued to the early Islamic era but slightly modified to include some Islamic religious teaching. The wayang show persists up to our modern era but not as intense as in the past.

The most popular stories performed in the wayang are Ramayana and Mahabharata, the Indian folklores which have been transformed and adjusted here and there to reflect the local conditions, especially in Java and Bali.

The technique of play has evolved for centuries and now comes to a standardized model, even though invention in the techniques and addition of stories can be done by creative dalangs. They even insert various happenings found in modern society, either criticize the government for being negligent to support low-income families or congratulate any government policy leading to a prosperous and just society. 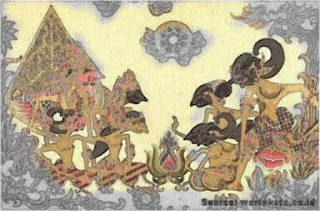 Just recently, a Japanese humanist Ryoh Matsumoto played wayang scene entitled Beast and the Beauty in Solo, Central  Java. He said that the last 40 years of his life was dedicated for wayang world.  Many of his researches on wayang in the form of knowledge and stories have published in Japan.


He performs wayang in Japanese language and creates 7 new figures, including the giants and fairies.  Collecting more than 1500 kinds of leather puppets, he knows well and keeps in mind the names of more than 600 wayang figures.

In some other countries, wayang attracts more youngsters because of its deep philosophy guiding people for having better moral and characters. In the Netherlands,  the Delft Museum keeps all kinds of wayang complete with various fragments of stories from Mahabharata and Ramayana. With the aim to let the youngsters know more about wayang, certain workshops are always held at Leiden.

Due to the uniqueness of the leather puppets with its elements such as dalang,  thousands of shadow puppets with different characters and set of  traditional gamelan as well as in the dissemination of the ancient philosophies and wisdoms told in the wayang story, UNESCO has recognized wayang as masterpiece of oral and intangible heritage of humanity in November 2003.
Posted by r.sudibjo at 12:12 AM