In the easternmost Java, in the small city of Jember, an annual event called the Jember Festival Carnival (JFC) has attracted thousands of spectators from around the country and becomes one of the world-class carnivals during the last five years or so. 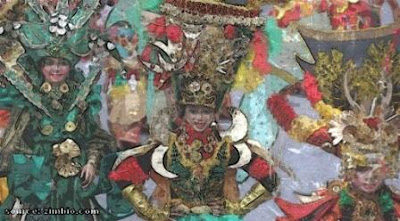 Jember, located around a thousand kilometers eastward Jakarta, is an agricultural regency with numerous tobacco plantations at the lowland and coffee plantations in the surrounding mountainous areas. It can be reached by road or railway at around two hundred kilometers southeastward of Surabaya, or at a closer distance but with a bit extra efforts from Bali by crossing the strait separating the two islands.

This low economic growth area suddenly becomes famous because of an initiative and determination of Dynand Fariz, a motivated son of a local peasant who decided to convert himself from a lecturer to become a fashion designer.

Back in his little hometown, which once he was ashamed of, he founded a fashion house and short after launched what is now known as the famous JFC. He asked his 30 employees to wear simple costumes and almost no makeup marching around the Jember square. His passion for fashion and his love to the hometown, make his dream materialized and slowly grew bigger to the size we know today. 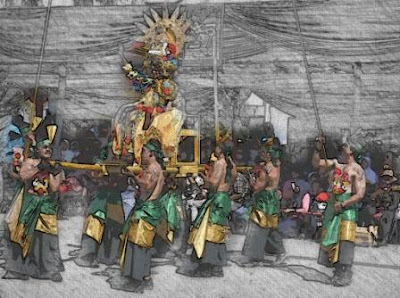 Last Sunday, July 24, the city held the tenth JFC with an eye-catching theme, the “Eyes on Triumphs”. Hundreds of photographers, as well as national and foreign media, covered the event witnessed by thousands of spectators sitting in tribunes, not mention a large amount of crowd viewing along with the 3.6 km runway carnival.

It is amazing to see a person with barely nobody support can dramatically change the spirit of people and the "sleeping" city he lives in. Some other regions follow imitating the success of JFC, such as Solo which holds a similar event, the Batik Carnival.

Congratulations to those brave people who manage to realize their obsessions, which the country may take benefits!
Posted by r.sudibjo at 4:14 AM