Indonesia is an archipelagic country which innumerable coconut trees cover its thousands of islands. Those palm trees yield various kinds of products mainly palm oil. The height of the tree makes it hard to harvest the mature coconuts.

In certain areas where coconut trees are plentiful, such as in West Sumatra, the tree owners are enjoying their lives because they can domesticate a certain type of monkey to pick the coconuts for them.

This kind of monkey, a pig-tailed macaque, is trained to climb and pick up coconuts and taught to select the mature coconuts. One monkey is able to pick up around 800 coconuts a day and the monkey owner usually receives 10% of the outputs. 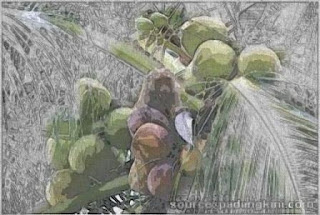 However, such kind of business cannot be done extensively as only a handful of people can train a monkey to do such a job. The training is done gradually, starting from finding a couple of coconuts at the lowest part of the coconut tree and urges the monkey to pick them up one by one.

Then the trainer binds the coconuts at the higher place and lets the monkey climb higher to pick the coconuts. The training is continued until the coconuts are bound at the top of the tree. Then it is taught to differentiate the mature from the immature coconuts allowing it to pick up only the mature ones. After one or two-month training, the monkey is ready to do the job.

Special attention to the health and daily staple diet of the monkey should be given especially when it works hard a day long. Maintaining good relation and communication between the owner and the animal will make it easy to obey the order.

People in Java employ animals more for fun than for doing business. The animals are trained to dance, ride on miniature bicycles bringing umbrellas or behave like a clown accompanied by music instruments played by the owner and his assistants. The performance is usually held around the marginal areas from one place to another. 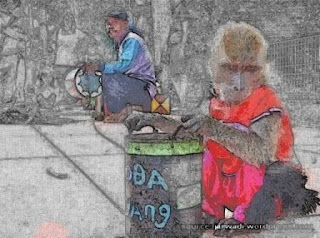 The performances of the trained monkey are widely known in the whole island of Java. In the olden days, the monkey dancing might attract a lot of people that make the owners get much money.

There is a region where many people are specialized to catch wild monkeys and train them to dance. After 5 months, when the trained monkeys are able to perform entertaining actions they sell them at least one million rupiahs.

The Primate Research Center found that more than 50% of trained monkeys were infected with the simian foamy virus (SFV) or herpes B which can spread among human being. For preventive action, the audiences should be prevented for direct contact with those animals.

Please do business with the monkey, not monkey business!