Once a Year Massive People Exodus

Indonesia is a unique country having a tradition for people to ask for pardon to each other on the celebration of Eid-al-Fitr, the Moslem’s most venerated day, especially from the younger to the elders. As most of the big cities residents originated from the hinterland, they have to travel back to their native hometowns or villages as most of their parents and relatives live there. Under such tradition, a massive exodus takes place once a year from big cities to the countrysides.

The following figures talk by themselves. Most people started moving out since the third day before the D-day. The statistic indicates that around 27 million people made an exodus to their home town in 2009 and the number increases by 10 percent annually. The final figure for this year is not yet available, but we can estimate that more than 30 million people had moved around. The people movements within and crossing out of Java were around 16 million categorized by the modes of transportation: land transport 5,5; ferry 3,3; railway 3,1; airplane 2,5 and marine 1,6 million. 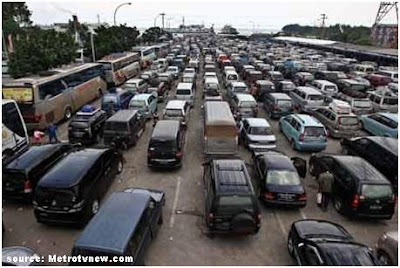 During the peak season, the travelers increased their journey-hours up to three to four times of the normal time. The government has taken extraordinary efforts to improve the transport infrastructure to minimize road congestion. Some roads’ sections had been widened by adding the number of lanes, cutting the elevation to flatten out some climbs, putting in operation some additional bridges parallel to the existing ones. The number of police personnel on duties was increased spread out in various regional districts to handle the traffics. In addition, the government took the responsibility to keep enough fuel stocks to meet the fuel demand hike during the season.

Even though the potential train passengers increased significantly, to increase the passenger convenience the railway management "bravely" imposed for long distance routes a stringent regulation limiting the number of passengers in accordance with the seats available. For that reason, the number of intercity buses was increased to around 35,000, some of which to handle travelers who were not able to get the train tickets. 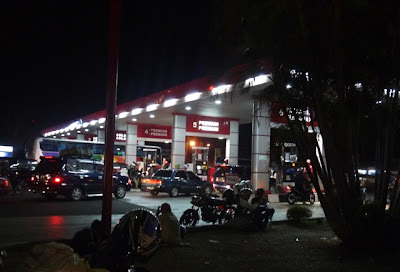 It is common to see motorcycle drivers bringing with them the whole family including small children. As the travel distance they took might reach 500 to 1000 km, the police forbade such practice and in certain routes parallel to the coast motorcycle passengers with children were asked to bring their motorcycle in the boat provided by the government for free. In addition, the police in cooperating with gas stations and mosques provided some modest rest points along the roads for motorcycle passengers.

Under such massive exodus, human casualties due to traffic accidents could not be avoided. The number of casualties prior and after Eid-Fitr increased to around 4400 this year as compared to 2,400 last year, of which 630 died 1,070 heavily injured and 2,700 lightly injured. With the aim to reduce the accident and monitor the flow of the vehicles, the government had set 230 CCTVs in various critical points.

This year Eid-al-Fitr celebration fell on August 31 which was determined based on the traditional lunar astronomical observation as against the astronomical computation. This arose controversy as the government stipulated the date only in the last minutes. Million of people had already prepared to celebrate the venerated day on August 30 in concordance with the public holiday stated in the calendar by cooking big meals for the visiting relatives or ordering meals through catering enterprises for groups who organized a big gathering. 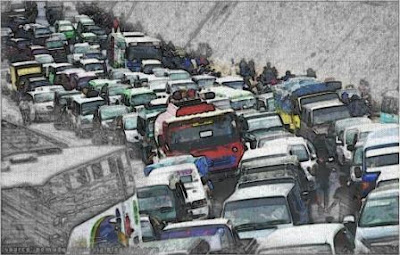 After Eid-al-Fitr prayer people are used to enjoying the big meal together with the whole family. Following the government stipulation, however, as fasting continued for another day most festive meals were untouched and became rotten. In addition, the lengthy deliberation that the government held to get the final conclusion made people difficult to conduct “tarawih”, a night prayer performed during the fasting period, as the date was finally stipulated only late in the evening.

Whatever method the government would take to determine the date of Eid-al-Fitr, it should be the most pragmatic one. Most people still rely on whatever the government decision and the long delay of such a decision would cause widespread confusion across the country as millions of families and business people should be ready to promptly change their plans.
Posted by r.sudibjo at 12:38 AM