For more than 30 years subsequent to 1965 G30S abortive coup, the government had discriminated PKI members and their descendants from others. All ex-PKI members had their identity cards labeled with ‘ET’ (ex-political prisoners) code which made them almost impossible to get a formal job or enroll in higher education. Furthermore, as every citizen should get a ‘G30S free’ record from the police office, PKI descendants face similar obstacles. Worst come worst, most people still stigmatized them as reprobates and just about segregated them from the rest of society.

Nobody, however, blamed such a harsh policy. How could it be?  People at that time were extremely traumatic about what PKI did beforehand. Since 1960 PKI raised political tension by provoking their adversaries using slogans ‘seven city-devils’ and ‘seven village-devils’. Almost every day they provoked and created conflicting incidents and polarity among citizens. And it reached a climax when they murdered top-level generals at the night of 30 September 1965 using Tjakrabirawa hands. 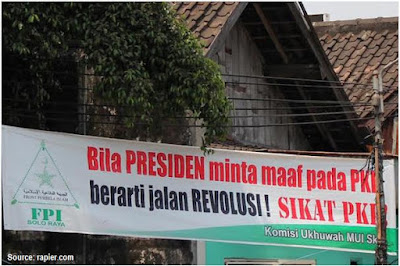 And all the sudden the hell broke loose. By then PKI movement was totally losing its morality ground. People saw that it was PKI who the real monster and was eligible to be scrapped from the earth. People were still traumatic from PKI brutality in 1948 where PKI slaughtered many of its adversaries. People ran amok and for many, it was a matter of to be or not to be. The bloodshed was spread out but now the victims were PKI members. The anger towards PKI deed was so widespread that eventually, the government banned PKI followed by MPR’s decree banning the communist ideology throughout the country for good.

Now 50 years later, there are always people who take lightly PKI latent danger. There are even some who are still doubtful about the role of PKI behind the incident and allege the movement was TNI internal conflict. There is a growing demand especially from PKI descendants for justice and the government’s apology for ‘1965 genocide’ against PKI members. The movement was supported and facilitated by the National Human Rights Commission (Komnas HAM) demanding for national reconciliation. One of the proponents was Nursyahbani Katjasungkana, a noted lawyer, who went further by submitting the issue to International Tribunal Court in Den Haag last year in order to attract international attention.

Lt. Gen. (ret.) Agus Widjojo Sutoyo, on the other side, had an idealistic move by broadening the scope establishing the so-called Brotherhood Forum for Nation Descendant Generation in 2003 aimed to reconcile both opposite sides who felt victims of either in G30S, DII / TII or PRRI rebellions. However, when he organized a symposium a few months ago, most attendants were PKI descendants and sympathizers. Ironically, this even caused him being accused as PKI proponent albeit his father General Sutoyo was one of PKI victims fiercely dumped into the crocodile pit. 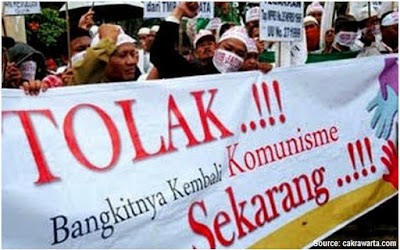 Having done that, instead of gaining sympathy from the grand public, the reaction towards the movement of PKI descendants were furious. They made the sleeping hard-liner factions mainly from Islamic factions wide awake.

Here are a few of the examples:

At Islamic Student Association of Indonesia (PII) Grand Reunion in Denpasar, last year, Director of CICS, Arukat DJ stated that PKI latent danger has bounced back metamorphosing anywhere. The new shape of the communist organization has undergone many changes. They started to openly voice their interests, not in a humble gathering but holding instead meetings in luxurious hotels. Historically, PKI revolts in 1948 and 1965 caused a lot of casualties and, therefore, any demand asking for the government’s apology must be rejected. People in East Java will be the first to oppose it, he concluded.

The Front of Islamic People (FUI) released their harsh reaction voicing their seven demands, among others:

Indonesia University historian, Abdurakhman, reminds those historical events are part of the learning process and the G30S/PKI tragedy was no exception. The important thing is not relating to the commemoration of the event but on how the learning process can be drawn from it. People should comprehend the values ​​of Pancasila not just merely knowing them. 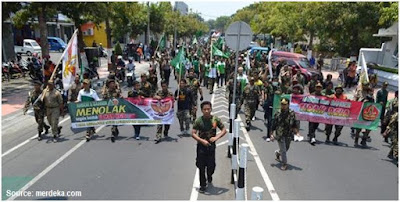 Meanwhile Minister of Defense Ryamizard Ryacudu strongly reminds that PKI has a harmful insidious ideology and its school of thoughts and associated symbols must be eradicated. The history demonstrates that the existence of PKI always caused political upheaval and bloodshed spread everywhere. No PKI resurgence could be tolerated and for good.

Lesson learned. The G30S tragedy and the PKI fate should be closed in the sense that it becomes a historical part of the nation building. The reconciliation should be considered as being done. Nobody now discriminates PKI members or their descendants, no further card identity labeling and no further free-G30S record needed. Everybody should understand the universal order of cause and effect. The victims were not only from PKI sides but also from its adversaries. To demand the government’s apology will only create a political uproar. Socially, but not historically, everybody should forget tragedies that now become the past and look forward to a better future.
Posted by r.sudibjo at 1:04 AM