The regional political tension in the South China Sea (SCS) is escalating following the China rejection of the whole verdict of the Permanent Tribunal Arbitration in The Hague on July 12, 2016. On top of China Government statement, all Chinese media warned in an angry tone that there could be a military escalation after the verdict that they considered as an ill-founded ruling that was naturally null and void and had ignored basic truths and trampled on international laws and norms. The media included Xinhua, the country’s official news agency, the nationalistic Global Times tabloid controlled by the Communist party and the People’s Daily, the Communist party mouthpiece newspaper.

Under such China menacing attitude, one should appreciate the warning of Prof. Yusril Izha Mahendra, ex-Minister of Justice and Human Rights and Amir Hamza, Chairman of Geo-politics Department of Renaissance Institute, on the danger of increasing China workforces, executing various big projects in Indonesia, both legally and illegally. The potential danger arises when Indonesia permitted Chinese workers to make their entries into Indonesia, in exchange for some big projects they financed, say, rapid-train Jakarta-Bandung or Steam Power Generating Center in Celukan Bawang, Buleleng, Bali. 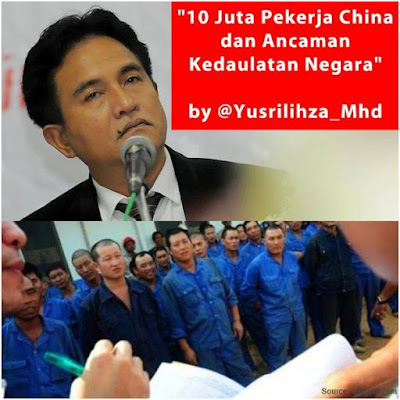 The potential problem of a big number of Chinese workers and other civilian people entry  started to arise with the visit of the Chinese Deputy Prime Minister Liu Yandong attending the bilateral meeting held at the Campus of Indonesia University in Depok on May 27, 2015. A memorandum of an understanding was signed, where both countries agreed to exchange 10 million people in 2020 with the aim to have close cooperation in politics, economics, trading and humanism.

Rumor said that since then thousands of Chinese workers have arrived here, many of whom were in the postures of highly trained soldiers, to be employed in projects financed by Government of China. Prof. Yusril Izha Mahendra was quoted as saying that the existence of such a big number of Chinese workers will certainly cause social, politics and economic problems. Prof. Yusril was absolutely right and we must share his anxiety towards the current situation in Indonesia today.

A political expert, Amir Hamza, reminded us of the history that can repeat itself related to what was happened in Tibet early 1950s. He presented an example of hostile take-over of an independent country, such as Tibet, as done by Chinese military personnel who disguised as project workers. “Once Tibet was an independent government with its own sovereignty, but China grabbed a good opportunity taking the advantage of projects they constructed at various parts of the country to carry out their hidden agenda. One day the highly trained Chinese soldiers who disguised as workers launched a surprise military attack and colonized the country. Even Tibetan leader, Dalai Lama, had to become a refugee and needed to find out political protection in other countries,” told he.

Experts with keen eyes pointed out that, if millions of Chinese workers are equipped with firearms, Indonesia can be wiped out within a few days. Even thousands of agents completed with high explosive bombs and heavy arms are enough to topple down Indonesian independence.

The danger may be imminent and we cannot just ignore it. We used to think conventionally that the danger might happen only when the Army’s high officials launch coup d’état or if foreign countries’ soldiers equipped with heavy arms inundate our country. But we never imagine that the creeping foreign coup d’état can take place silently. 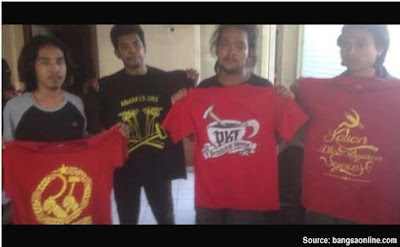 Though the government has announced that the issue was just a rumor, one thing is clear: thousands or could be millions of Chinese workers, hopefully, they are not disguised highly trained soldiers, have arrived here, legally or illegally. Don’t forget those silent activities towards the revival of Indonesian Communist Party (PKI) are rising before our very eyes who most people are unbelievably laughing on it.

Majority of people believe that communism was already dead and fearing about its revival is just like seeing a ghost in the midday. Notwithstanding, what has taken place in Tibet might happen here in Indonesia under a similar scenario. People’s anxiety should also be the government’s anxiety. Therefore, we need to raise our voice as loud as we can, before this theory of silent hostile take-over will turn out into a nightmare.
Posted by r.sudibjo at 7:19 PM