The railway transportation portrait in Indonesia was always associated with crowded passengers squatting on the top of the carriages and illegal ragged shelters at railway banks and illegal stalls occupy the station platform and parking lots.

Public attitude used to consider public service should be cheap and doesn’t concern with the resulting low revenue and insufficient operation cost that may deteriorate the related service.

The railway situations in the country degrade and many railway tracks considered as uneconomic were dismantled.  Barely new tracks and new stations have been built in the country since the independence day. The moral of railway personnel were so degraded that it becomes a public secret that many railway employees feel at ease dealing with the stalls and the shelter owners to gain some regular petty cash as though their behavior is a normal one. 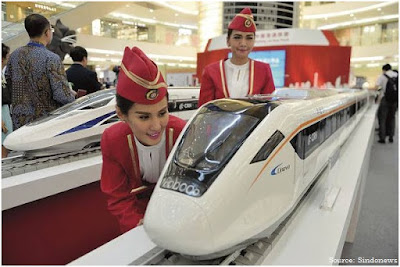 However, there was a change in the people mindset that such permissiveness towards the indiscipline of the part of the society even though on behalf of the poor cannot be continued. The slums which have grown at the railway banks and illegal stalls within the station area gradually were eradicated. In the last several years, train management has set electronic means (e-ticket) at 63 stations in Jabodetabek in order to reduce illegal passengers.

However, as compared to other countries which have already jumped operating high-speed train (HST), we are still looked as though crawling using outmoded locomotive and carriage. You just name it: Japanese Shinkansen bullet train, France TVG-high speed train, or German Inter-city Express (ICE) train which can run very fast at more than 350 km per hours.

And today the government wants to make giant leap that nobody dares to imagine before. It looks as though we just jump from stone age into the modern age. The government now is very aggressive and a little bit ambitious to build and develop the infrastructure widely throughout the country. Indonesia wants to follow the advanced countries to develop high-speed train hoping that it could accelerate the regional development in accordance with Transit Oriented Development (TOD) plan. 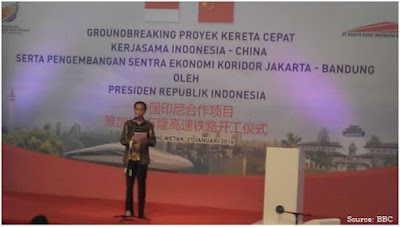 The first project selected was Jakarta-Bandung track. The kick-off for this first HST project took place on January 21, 2016, on which event President Jokowi inaugurated the groundbreaking ceremony. The HST will connect Halim in Jakarta, Karawang, Walini, and Tegal Luar in Bandung Regency, covering the distance of 141 km in 35 minutes with USD 20 ticket price. There will be around 40 round trips a day carrying 583 passengers per trip or around 24,000 passengers per day. The inter-city railway track with the destination to the stations of the high-speed train, called Light Rail Transit (LRT), will also be constructed.

The constructor of HST costing around USD 5.600 billion will be China Railway International joining with a consortium named PT Pilar Sinergi BUMN Indonesia (PSBI) consisting of PT Kereta Api Indonesia, PT Wijaya Karya, PT Jasa Marga, and PT Perkebunan Nasional VIII. It is expected that the project will be completed in 2018 and fully operated in 2019.

As a new project, it is normal that there are still pros and cons. One of the objections is that there are too many stops for such a short distance of 141 km that make the train can never gain its full speed instantly. There is also an issue on the use of National Budget because so many State-owned companies taking part in the project. 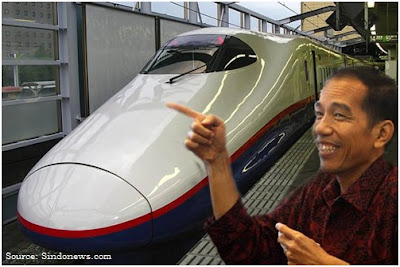 The government is firm to continue the project not only for Jakarta-Bandung track but other longer distance such as Jakarta-Surabaya, in big islands such as Kalimantan, Papua, and Sulawesi, as long as the project is viable and the fund is available.
Posted by r.sudibjo at 12:39 AM