With its 17,000 islands spread out across its territorial water, Indonesia possesses high potential underwater activities and tourism surrounding some of the islands. On top of the already famous Bunaken underwater tourism in North Sulawesi, one of the newcomers with promising development is Raja Ampat. 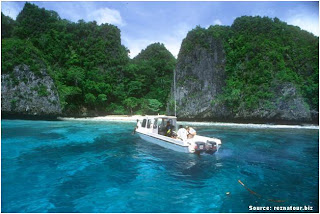 Raja Ampat, a newly developed paradise, is located in a remote area far from modern lives. It consists of four islands namely Waigeo, Misool, Salawati, and Batanta and some other islets around the seawater at the north coast off-shore of Kepala Burung (literally means Bird Head) of West Papua.

The name of Raja Ampat (four kings) is related to the local myth that in the dawn of time the region was reigned by four kings resided in four main islands who born out of seven primordial eggs. It is interesting to note that the numbers may be correlated to the four pillars and seven heavens frequently mentioned in many myths and religions around the world.

Its underwater beauty attracts experts to make research on marine fauna and flora. In 2001, those from International Conservation and National Oceanography Institute have examined more than 550 kinds of coral reefs, 1,000 kinds of coral fishes, 700 kinds of mollusks.

The spectacular thing marking the uniqueness of this area is the fact that more than 75% of all coral reefs in the world can be found here. For scuba diving, it is nice because the seawater is clean and warm while marine fauna and flora are lots. 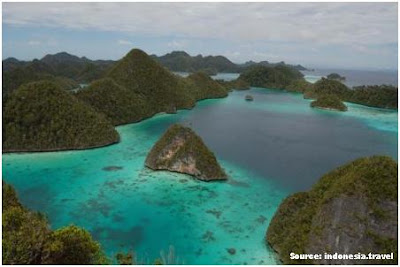 This is the reason why the area is considered as one of the top ten sites in the world for scuba diving. Various kinds of fishes are nice to examine, and besides, there are a lot of tamed manta rays searching around their pray inside the seawater.

From the prehistoric point of view, pictorial signs and sketches of human hands inside the caves of some islets can be found here. It is estimated that the sketches and signs have been 50,000 years old. These inheritances can be the early indication to trace the human circulation around islands scattered across the Pacific Ocean.

To conserve the unique of coral reefs and marine mammals such as dugongs and dolphins, in 1993 the government has issued a decree stipulating that seawater covering the area of 60 thousand hectares around small islets of Mansuar, Yeben, and Batang Pele became the protected one. 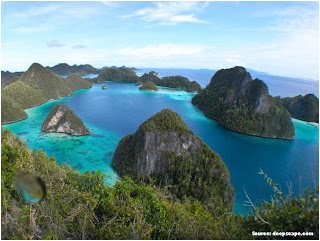 Despite its beauty, there are some hindrances the tourists have to face when visiting the site. The first one is related to transportation, board, and lodging. For the visitors coming from Jakarta, they have to take six-hour flight with the destination to Sorong after a transit in Bali.

From Sorong, there are some travel bureaus which can offer you various boats and routes to sail around the sea water or to land at a certain island and examine the vegetation of the island. However, you have to make sure that the boat can withstand the big waves.

The second problem is for board and lodging if you want to have a comfortable one. For this you can take Sorido Bay Resort or Kri Eco Resort, a traditional resort constructed on poles above the seawater. There are also some motels in Saonek, Mansuar and Yenwaupnor islets. Or if you like to have an outdoor life and want to be more economical you can construct a tent on shore of an island. The best time to go there is on October and November when the seawater is relatively calm.

Welcome to Raja Ampat, one among the best underwater paradises in the world.