The SEA Games XXVI was joyfully closed with an extravagance musical and dance performances by the Indonesian and Myanmar contingents, respectively, as the current and succeeding host for 2013. The SEA Games was participated by all ASEAN member countries competing for 542 gold medals distributed in 43 games. 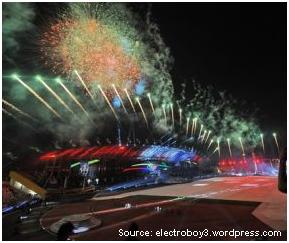 This biennial Southeast Asian Games (SEA Games), first held in 1977, was the continuation of Southeast Asian Peninsula (SEAP) Games. The participants are the ASEAN member countries, a geopolitical and economic organization of 11 countries with a total population of around 600 million. ASEAN as a whole rank as the ninth largest economy in the world. Its combined nominal GDP [2010] had grown to US$1.8 trillion.

The ASEAN was established aiming to include the acceleration of economic growth, social progress, cultural development among its members, the protection of regional peace and stability, and to provide opportunities for member countries to discuss differences peacefully.

Indonesia became the overall champion in this event grabbing 182 gold, 151 silver, and 142 bronze medals. It was the 11th overall championships for Indonesia in 16 Games since it has taken part in the events. Indonesia as the host of the Games chose Palembang, South Sumatra, as the focal point of the event complimented by Jakarta and its surrounding areas for some specific games. 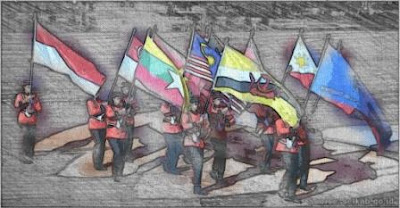 Such decision was made mainly to enhance the regions’ capacity building and stimulate their social-economic developments. It required big extra efforts and funds to build the infrastructure and venues for the games for a relatively short time. Being lack of venues, some national and foreign trainers and referees were lodged in a first-class liner and a warship which both capable to accommodate 4,000 persons.

Some foreign media criticized that this time the SEA Games was hurt by local squads as there are too many local games which are not widely known as those held in Asian and Olympic Games. They suggested that it would be better if the SEA Games concentrated on the games that might be used as the stepping stone for the Asian and Olympic Games. Comparing to those of 24th SEA Games held in Thailand, however, the number of games competed in this event was the same [43 games]. 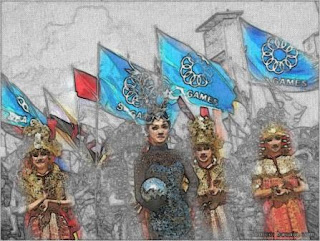 Notwithstanding, the SEA Games events should have their specific nuance of the sports taking more local contents reflecting the richness and diversity of the region. This is exactly the underlying objective of the SEA Games and not the number of medals that may be gained by whoever the host country. The event should hold the spirit of the ASEAN unity under their inherent diversities and pluralities.

With its outstanding success it is hoped that, albeit the Indonesian’s disappointment on losing the gold medal for their dear soccer team, Indonesia will make more progress toward the bigger international sports events.

Lest to forget, albeit being shadowed by some conflicts raised between member countries, the success of such sports events will certainly contribute to the enhancement of the political stability and preservation of peace in the region.
Posted by r.sudibjo at 9:05 PM No comments:

Indonesia is a maritime country but ironically its maritime potency is not fully exploited yet. The central and regional governments try their best to make use of all its resources, be it fishery or maritime tourism among other yacht sailings. Recently, the yacht sailing was held under the name of Wakatobi-Belitung Yacht Sailing, the international racing between Wakatobi,  at the coast of southeast Sulawesi, and Belitung island.

The current yacht sailing was the continuation of the sailing started from Darwin on July 23 which took stop over at Wakatobi. The sailing was participated by around 200 yachters, 61 of which came from 17 countries among others Canada, USA, Australia, Brazil, New Zealand, and Italy. 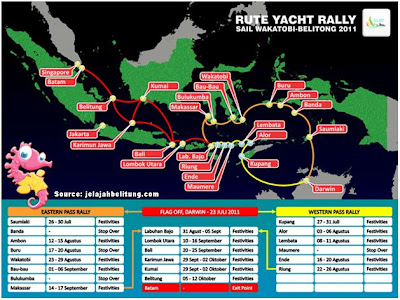 Both teams arrived in Labuan Bajo after five to six weeks and then sailed via Bali where the sailing ended at Kalayang Beach, Belitung one month later. In order to disseminate the maritime tourism, a series of events under the theme “Clean Ocean for the Future”, were held before the arrival of the yachters. Several events were organized such as a seminar on Marine Tourism,  East Belitung Fair, and various kinds of sports: beach volleyball, diving competitions, jet-ski attraction, underwater photography and underwater chess competition. 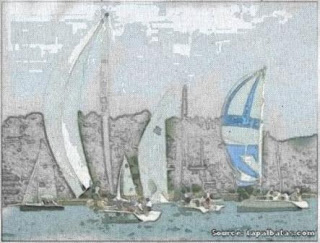 On top of the Wakatobi-Belitung sailing, the same events already took place a long time ago. The first group of yacht sailing events was held aiming to call for more Australian yachters and tourists to visit Indonesia especially Bali. This yacht sailing, under the name of "Visit Indonesia Fremantle-Bali International Yacht Race" covering the distance of around 2,600 kilometers, was held irregularly from 1981 to 1997. After no activity for 14 years, the event restarted in April  2011.

The second group started in 1986 is an annual event under the umbrella program of Ambon and Darwin cities and are supported by Indonesian Ministry of Tourism and Darwin Cruising Yacht Association and local government of Northern Territory, Australia. It is hoped that all yacht sailing events will be held annually with the aim to strengthen the Indonesian position as a maritime country, to boost foreign tourist visits and maximally develop maritime resources.

We all wish for the best!