In the westernmost cape of Java Island there live rhinos of a rare species having a single horn out of 30 species once lived on earth. Rhinos are the animals witnessing tertiary period, started appearing on earth since 65 million years ago. Unfortunately, most of all those species perished already leaving behind just five species roaming on earth. 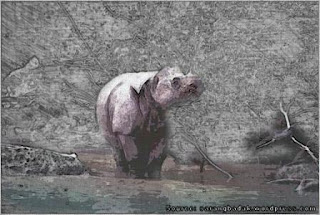 Of those five, two species live in Indonesia, one of which is Javan rhino, the most endangered mammal living on earth today. Their population is estimated at around 40 and could be in the brink of extinction. Other species with two horns live in Sumatra, with a population of around 300 and in the other part of the world in India and Africa with a population of more than 30,000.
Forest fire, catastrophic disasters, destruction of the ecosystem as well as their safe habitat, the difficulty of their breeding process and more recently illegal hunters, all are the causal factors. They lead to the extinction of the majority of them and today the remaining 5 species are trapped in the narrow protected forest as their habitable areas have been taken over by human beings.

The difficulty in their breeding process is caused by the fact that the female just bears a baby, after the 19-month gestation period, while waiting for the next 5 years to bear another one. In addition, under a small population, the interbreeding will take place making them vulnerable to various kinds of diseases.

The life span of rhinos can be 45 years in their sanctuary, but usually less than that figure in zoos. Roaming area of a male is around 20 square kilometers and it marks the areas with feces and the scarves on earth or young trees. Violation of the territorial boundaries might result in a clash between the owner and the intruder. 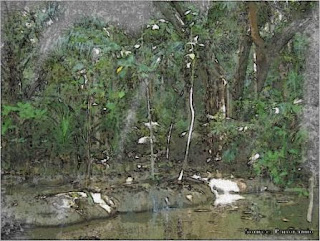 Illegal poachers are intensively searching for rhino horns as the price of the horn is quite expensive around US$ 30,000 per kilo at the black markets. As a consequence, if it is not handled properly the damage might lead to non-repairable limit and the extinction of exotic species is only a matter of time.


Javan rhino was protected by law stipulated in 1910. In 1921 Ujung Kulon became the sanctuary of the animal and today it is named Ujung Kulon National Park has an area of 380,000 hectares. In 2006, the census held by the authority of the park using automatic camera and sample of their feces provided a smaller figure, 27. During the last 75 years, the total number never hit the figure of 60.

Today, Indonesian WWF tries to breed the rhinos at Halimun National Park at Mount Salak, West Java, and if possible make use of the only 7 Vietnamese male and female Javan rhinos to prevent interbreeding. On the other hand, the government is planning to build an electric fence around the 3,000 hectares of Javan Rhino Study and Conservation  Area in Banten's Ujung Kulon National Park. The area was established in June last year by the Ministry of Forestry and is managed by an NGO, the Yayasan Badak Indonesia.

The proposal includes the construction of 20 kilometers electric fences at the eastern boundary separating the conservation area from the densely populated village areas and 2 kilometers at the western boundary separating from rhino population area. As the northern and southern parts of the conservation area are bounded by the sea, the fences enclose totally the area which is converted into a sanctuary for Javan rhino.


The plan is inspired by the sanctuary for Sumatran rhinos in Way Kambas, Lampung, but the fence there encloses a smaller area of 200 hectares. Under the action plan, the government is looking to boost the population to 80 by 2015 and hoping to reach 1,000 by 2075. The project raises pros and cons as its effectiveness is still questionable, even more, when roads for patrol activities of 30-meter width are built along the fences across the protected jungle.