Most of the Indonesian students know about the Majapahit Kingdom, but only a part of them know about Trowulan, and just a few have complete data and information about this historical site. The grandeur site of Trowulan is now overshadowed by development at the surrounding areas, but all ancient buildings and temples which are still preserved today can be the authentic proof of Majapahit’s beautiful capital city in the past.

Today, Trowulan historical site is still undergoing the process to become world heritage under the official recognition of UNESCO. While the process is going on, East Java government is now trying to excavate the artifacts buried by mud and ashes, to guard the site against  being damaged by locals or outsiders.

Excavation at Trowulan site indicates that a part of ancient settlement was buried by river mud and volcanic ashes a few meters deep under the earth. Some archaeological sites could be found in Trowulan Sub-district. There we can find ancient buildings made of bricks and are now undergoing renovation.

MacLaine Pont, one of the Indonesian history experts, through the map he made in 1924 interpreted the perpendicular network systems in Trowulan as road networks. However, in 1981 Coordinating Body for Surveys and Mapping (Bakosurtanal) interpreted them as the discoloration anomaly of aerial surveillance photos caused by the buried water-canal networks used by locals to manage water governance system in the XIV century. 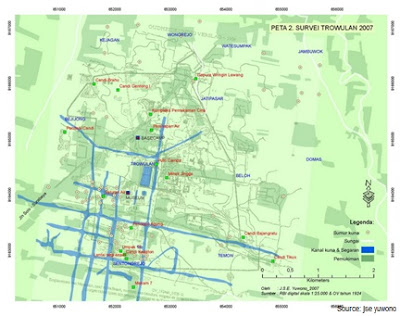 Formally there is no excavation yet at the location in order to know how to design the ancient canal networks and its functions in those days. There are some reasons for the puzzles of this historical inheritance to be disclosed which covers 49 canal segments of 50 meters width perpendicularly intersected to each other.

As supposed to be the capital city of the Majapahit Kingdom covering the period of 1293 to 1518, Trowulan kept within the site measuring by 11 x 11 square kilometers a lot of historical artifacts, in the form of temples, bathtubs of noble elites, cemetery of kings and queens, remains of house buildings and the bordering wall of the capital city.

A good reference can be gained from 15th century Chinese historical note describing that Majapahit palace was surrounded by brick-walls up to 10 meters high with double gates. Buildings inside the palace area were supported by wooden poles of 10-13 meters high with the floor covered with mats for common people to sit down. The roof was made of ebony planks while house roofs of common people were just made of palm fibers and straws. 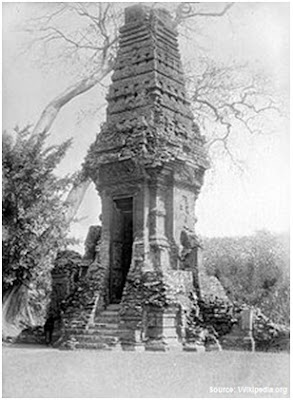 This confirmed Prapanca's historical book of Negarakertagama (1365) which described that Majapahit palace was surrounded by highly thick walls made of bricks. This Chinese account, therefore, can be taken as confirmation of other related details picture of the palace. Prapanca further illustrated that the main gate leading the palace, situated at the north, was big and made of carved iron. In front of the gate, there was a long building intended for an annual meeting with high officials. Next to it was a market and a holy crossroad. At certain spots, there were some small posts where palace guards were always ready to do their duties.

When one made his entry into north gate entrance, he could find a yard surrounded by holy buildings. At the west side of the yard, there were clusters of houses for palace guards constructed on terraces. Another gate leading to the next yard was a great hall, intended for guests waiting for their turn to meet the king. The king’s residence within the palace complex located at the east side of the yard near the great hall, consisting of a few pavilions and verandas made of carved bricks. The building was supported by the carved wooden poles quite high and big. Just outside the complex, there were buildings for Shiva and Buddhist monks, family members of the kings and high officials. A little bit outside, separated by a big yard, there was another complex of royal buildings, one of which became the residence of Gajah Mada, the commander of the Armed and Navy Forces of the kingdom.

Ruins of Trowulan ancient city were discovered in the 19th century. In his report, Sir Thomas Stamford Raffles, who served as Java Governor from 1811 to 1816, pointed out: “There are ruins of temples … spreading for miles at this region.”  But since the forest was so densely packed with teak wood, additional surveys and more detailed study were impossible. Nonetheless, Raffles, who was very interested in Javanese history and culture were definitely fascinated by what he saw and dubbed Trowulan as “The Pride of Java”. Bad news came in 2013 that a local regent has issued a decree allowing for the construction of a steel factory right at the site which normally must be preserved. After undecided matter, fortunately, Sukarwo, East Java governor, determined that any construction at the site would only damage this historical heritage, and so he banned it for good.
Posted by r.sudibjo at 7:30 PM